Witness, 1998, installation with paper and sound 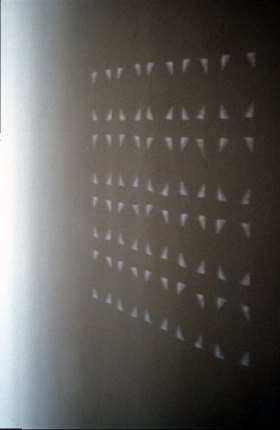 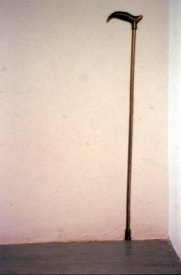 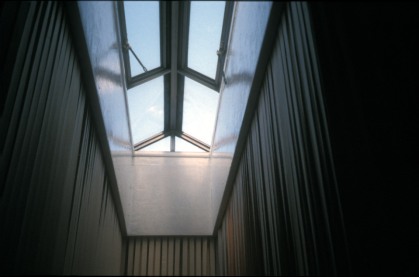 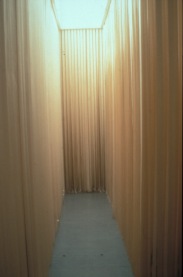 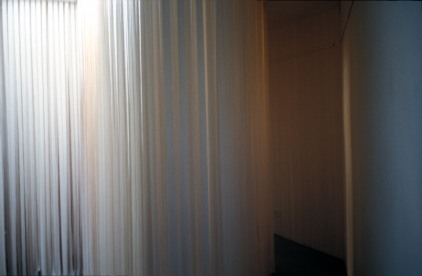 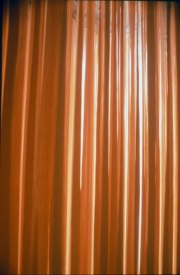 In the gallery, irregular in shape and windowless but for a small skylight, I began to suspend a line of paper, blank strips of till roll. The ‘wall’ blocked the already narrow entrance, thickening slowly into a mass and filling the gallery, but for walking space about its perimeter. Making a temporary territorial claim without claiming territory, a para-sitic ‘border’ slowly eroding its field of habitation, without usurpation, I sought to evoke location yet deny locatedness, to invoke a presence at once oppressive and overwhelming yet without fixity and weight; an encounter with a city and its histories, at once permeable, invisible, excessive, intangible, monumental and weightless.

Distrusting my own testimony, nor wishing for others to trust it, I mimed others’, speaking again the testimonials transcribed and edited for the earlier Un- (prose-fiction-pose-friction). My stage-whisper delivery a theatrical intimacy, the truth-value of opinions made questionable, conspiratorial, gossip-like, I layered these with Dictaphone recordings, rough sound-shots as counterpoints to the familiar picture postcard imagery of neon, skylines, and junks, which celebrated power or stereotyped otherness.[1] Sounds set the stillness of images and objects into motion, into contexts of activity: out of a window, cooking noises are carried up with their smells, the scrape of a wok-chan clashing with the cymbals of a radio opera; subjects move between neighbouring floors and blocks, twenty times twelve, as taxis, minibuses, trams and trains hum and drone. Reverberations and distortions exaggerate and condense the words, whispers and rhythms, mixed into a six-minute loop: silences alternate, bracketed by sounds.

The inner gallery, obstructed: a wall of paper. Follow it – not a plane but a mass, a body. No windows, but light glimmers in slivers; the blank forest hovers, translucent. Till rolls, no, ticker-tape, no, scrolls… a sober commemoration, transactions, exchanges, bribes, stripped bare. Verticals descend, relentless, harsh fronds, like canvases cut up. No marks, no gestures, everything and nothing to be said. It stirs with the movement of bodies, and parts, rustling, like a papery sea.

Walk between walls, firm and infirm, to a walking-stick mirage: an abandoned, forsaken guide. A pattern of corners glint softly when sunned, invisible photographs fading. Retreat into a recess; light fills and filters through clouds beyond a skylight, now bright, now dull; look up and a low-rise cluster peers back. Something familiar, unfamiliar. Here, somewhere else.

a great wall of paper

out of the window

a little England, fraught with lines

by earth, all watery stains

the sky is rueful, route-full

here not here in flux

dry leaves scorched to dust before I can gather

I feel the terror of loss

at the / of the very moment