Lean To, FCHKUK, and Elements of Drawing Blind were all two week projects approached as short-term residencies, that took place between 2000 and 2001, the former presented as solo exhibitions, the latter a group show  While Lean To and FCHKUK resulted in installations that explored the very notion of residency as ‘home’ (both hosts, the East London gallery and Stuff, an artist-run space in Bethnal Green, now coincidentally defunct), Elements of Drawing Blind responded performatively to an invitation to participate in a drawing residency in the West London-based artist-run Central Space.

Intermittent echoes of a song float down the staircase leading up to Stuff’s fifth floor gallery space. Inside its entrance is Protection, a found hat-stand, a skeletal figure that I decorate with a devil-horned hat and scarf covered in ‘SPSL’ badges; authenticity as accessory, or armour. The space is dominated by several suspended sheets, suggesting perhaps sails, flying carpets, or ghosts; props for childhood games that might transport one by water or air into other realms, or protect one from others. A bucket and spade lie amidst a sea or shore of spikes, a perforated border. Fluctuations of light offer a measure of temporality, through windows half-covered in pink tissue, casting occasional hints of a rose tint. 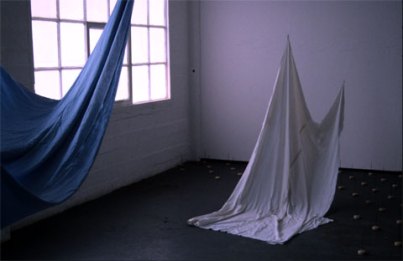 The title FCHKUK expands on one of the slogans from 97 Proofs, appropriating a well-known clothing brand to insert ‘Hong Kong’ into ‘French Connection UK’, or an acronymic French connection between Hong Kong and UK. Francoise Hardy’s “La maison ou j’ai grandi’ evokes nostalgia for a childhood home and laments its loss, its sentiments and sentimentality resonating with the yearnings of my younger self, and the persistent pull of Hong Kong, where I first heard the song. Where one might habitually read dualities – Anglo-Franco / British-Chinese – FCHKUK alludes to the triangulation of histories, temporalities, geographies, and the sometimes less than transparent connections that weave cross-culturally and cross-linguistically; an attempt to disrupt tendencies to imagine ‘home’ in opposition to ‘away’, and to question longings for a no longer or never was ‘safe place’ a haven, or ‘havent’.

Song evokes the ‘quotidian’ possibility – and impossibility of not – configuring memory, identities and histories complexly, perhaps unpredictably, across hierarchical distinctions usually underpinned by a logic of ‘the West and the rest.’[1] Thinking of the conventional uses of sound and music in the articulation of body, space, mood and temporality in film and television,[2] I looked upon the gallery as a comparable theatrical and fictive space. The track plays over and over, trailing away into silences that alternate with and equal the song’s duration. Its apparent function as musical commentary or ‘voice-over’ may be taken as straight or ironic, jarring with or enriching disparate contexts with the sudden power “to change the setting, to call up a thing, moment, place… at will”.[3] Yet any illusory cohesion of sound and environment is regularly dissipation of the sung narrative, the fleeting coincidence between the recollection of a no-longer place re-imagined in the song, and those remembered and tentatively conjured up in the gallery space subsiding with its imposition, fading out.[4] The accentuated convergence and divergence of the visual, aural and spatial repeatedly brings the opening night audience to the verge of dancing. However, unlike the song and dance sequences in musicals, where “utopian space[s]” or “moments of escape into a mode of emotional expression” that cannot be enacted elsewhere are made seamless by the gradual expansion of instrumental and rhythmic variations to match the image narrative,[5] escape and reverie are repeatedly curtailed, checked by awkwardness when the music recedes, and the ‘set’ remains.

In the bar adjacent to the gallery, a monitor is set up for FCHKUK / Slow Island Hop, a short piece that finds the opening sequence from Wong Kar Wai’s 1992 film, Chungking Express, re-edited, and its soundtrack replaced by my own. A home video recording of a copy of a copy transmitted on television, three times degraded and removed from its source, the sequence is dirtied, decelerated and truncated. Subtitles are edited out and the resulting one and half minutes are drawn out into five. Where music might otherwise safely propel bodies as they stop / start through frames, their slowed, halting fragments remain floating, unanchored by text nor synchronous sound. The disjointedness of the visual track is compounded by the sonic navigation, dislocation and mistranslation of place: faint echoes of song are interrupted by whispers and laughter, in between the condensed whir of traffic, while feet hit the ground in a solitary game of lines and square landings.

I was interested in the film’s romantic evocation of Hong Kong and its illusory symmetries built upon repetitions and displacements, non-events and mis(s)-es (non-coincidences, non-meetings, mis-registrations, mis-understandings, mis-recognitions), and the enunciative slippages as camerawork and editing combine to condense time and space, compressing bodies into claustrophobic, discontinuous and disorientating spaces heightened by a humid saturated palette. The cumulative visual and narrative loops and reversals have a strange and ambiguous effect; there is little transition, in the sense of plot progression, only sudden changes in the circumstances and look of things that go barely noticed by the protagonists – ignored, misheard or misread. In a densely populated city of some seven million, the question of how subjects negotiate space and each other recurs; my sampling of the film aimed to undo the unifying, cohesive work of the soundtrack, bestrewn with nostalgic pop songs, to accentuate instead the irresolution of pursuits and dislocating encounters in a “fractal city,” whose ‘centre’ proliferates in the repetition and displacement of itself – a self without centre – giving rise to the levelling out, the collapsing and skewering, of the temporal.[6]

dropped into a dark narrow street made narrower with bodies, birdsong punctures the silence, heralds a head-rushing dive into noise

the opening scenes unfold, adulterated, the decelerated footage slowed further: an Asian woman disguised in dark glasses and blonde wig forces her way through the crowd, sharp movements made deliberate, the abruptness drawn out

cut from claustrophobic ground to a twilight panorama of roof-tops, skies soaked in polluted blues: a moment of stillness

voices weave and clamber, crawl over, beneath, sometimes looping – a distant megaphone, some whispered confidences, the shaky phrases of a song

acoustic debris and visual noise cling like hair drawn by static to a balloon; source locations blur, spaces layer, compress, dimensions multiply, exaggerating echoes where before there were none, all the while, if sometimes submerged, a rhythmic smacking of the pavement as feet hit the ground

figures blur as the camera picks out a young man, plotting nuances of body, limbs, clothes, stopped in motion; he brushes past the camera, the woman in the wig, pursued / in pursuit of another, in a paper bag mask; he swerves into a building, its cursive pink neon sign waving, wavering, teasing, twisting; into labyrinthine corridors of eyes and elbows, glancing, grazing, and out again, slowing and stalled as he brushes the woman as before, and sounds recede, and each spins towards the other

a sudden connection, face to face for a second drawn out to five; fade to black [7]

[5] Ian Garwood, ‘Must You Remember This? Orchestrating the “Standard” Pop Song in Sleepless in Seattle,’ in Dickenson ed., op.cit., p.115.

[6] Ackbar Abbas proposes the notion of “ex-urbia” in relation to Hong Kong’s ‘New Towns’: while suburbias develop in differentiation from, and marginal to, a metropolitan centre, “ex-urbias” find that centre duplicated in its entirety, razed and raised over and over again. Ackbar Abbas, ‘Hong Kong: Other Histories, Other Politics,’ Public Culture, vol.9, no.3, 1997, pp.293-313.